Let’s make a walking water rainbow! There’s no better way for little scientists to learn about capillary action and color mixing than by making water walk (yes walk!) in this colorful science experiment.

This science experiment is a favorite of ours because it’s so easy to set up and the results are almost immediate.

Check out the simple step-by-step below and then join The Plato Pack so you can access DOZENS more jaw dropping (but easy prep!) science experiments kids will love! 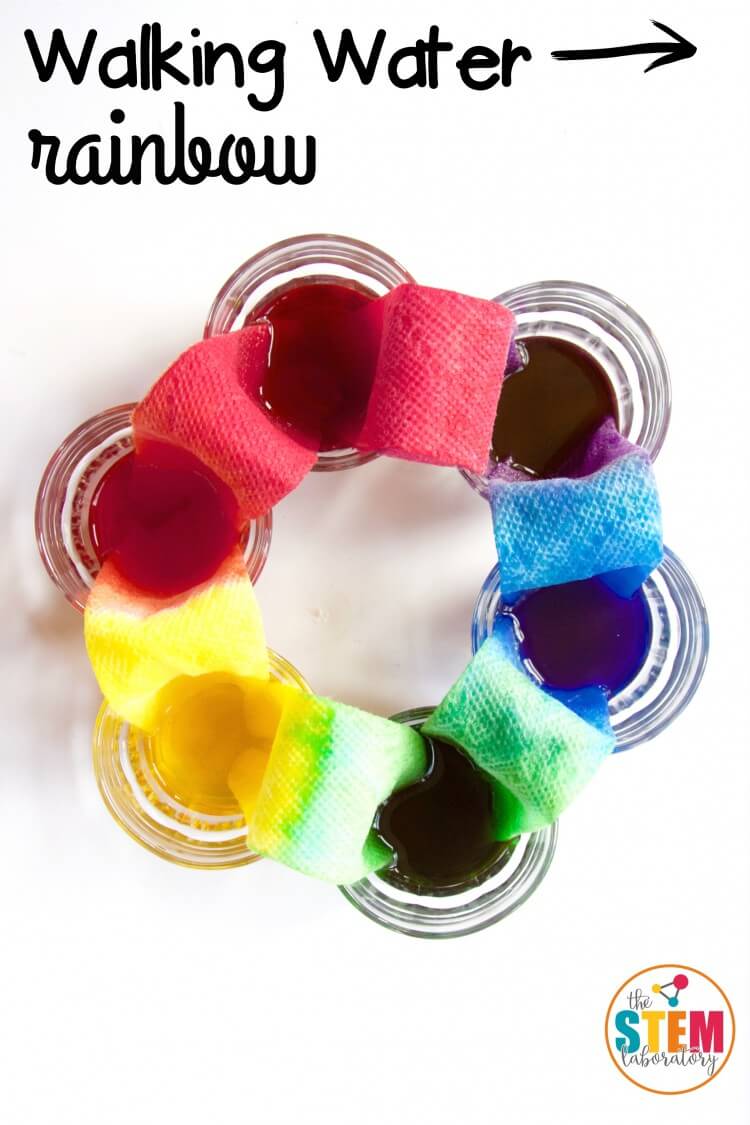 To prep, I gathered our supplies:

I grabbed the six small glasses first.  We’ve had success using wide mouth drinking cups and canning jars too.  Even though they all worked, just remember that bigger glasses will need more food coloring. 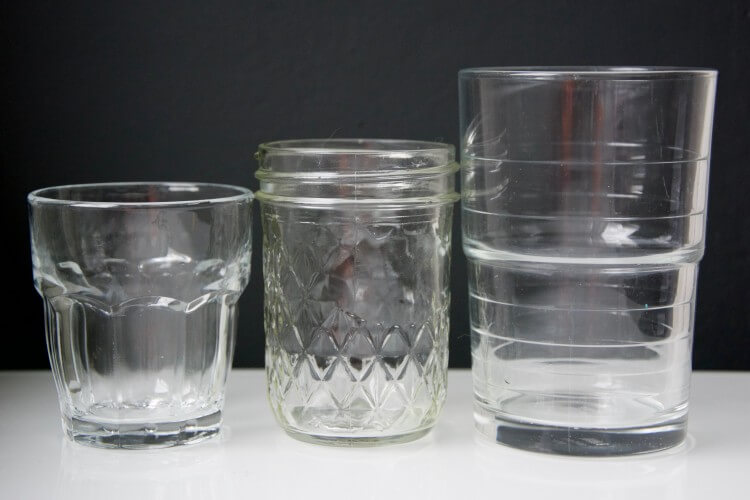 I ripped off six sheets of paper towel and folded each sheet in thirds lengthwise.

We were using pretty small glasses so I cut a few inches off the folded paper towel so it would fit in the glasses.

It’s a good idea to test your paper towel strip to make sure they fit properly in your glasses.  They should be able to go from the bottom of one jar to the next without sticking up in the air too much. The paper towel on the left shows the just-right height. 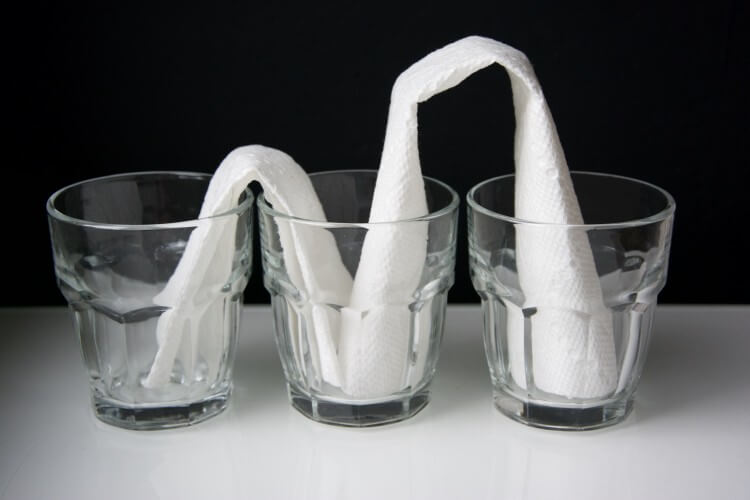 This colorful science experiment is so simple and quick, it’s perfect for even the youngest little scientists.  My 3 year old, Q, couldn’t wait to get started.

First, I had him line up the glasses and fill the first one with a good squirt of red watercolor, the third with yellow, and the fifth glass with blue.  We left the other glasses empty. 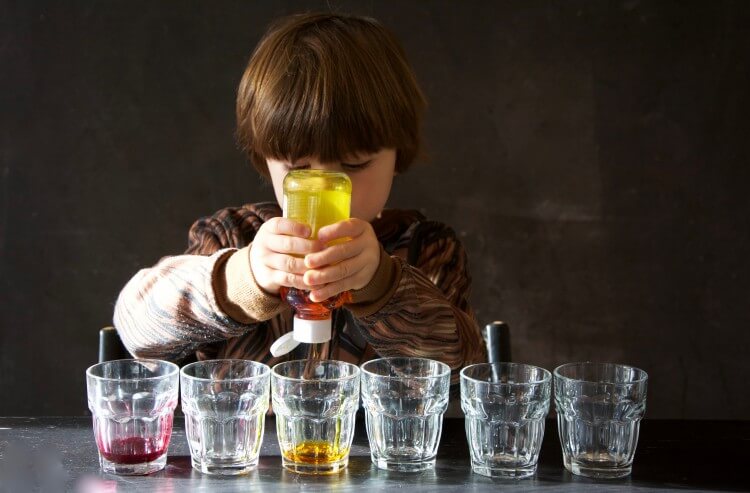 Next, I helped Q add water to the glasses with color until the colored water almost reached the top.

We moved the glasses into a circle and added the paper towels.  Starting with the red, we added one end of the paper towel and then put the other end in the empty glass next to it.

We continued around until the last paper towel was placed into the red glass. 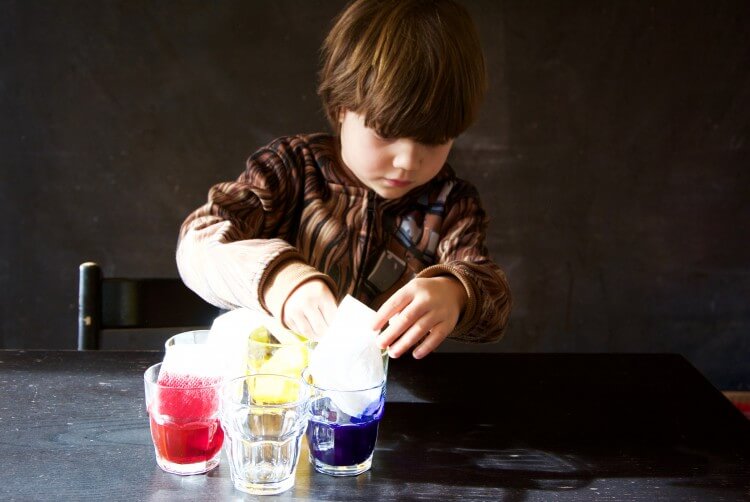 We saw the color wick up the paper towel right away. 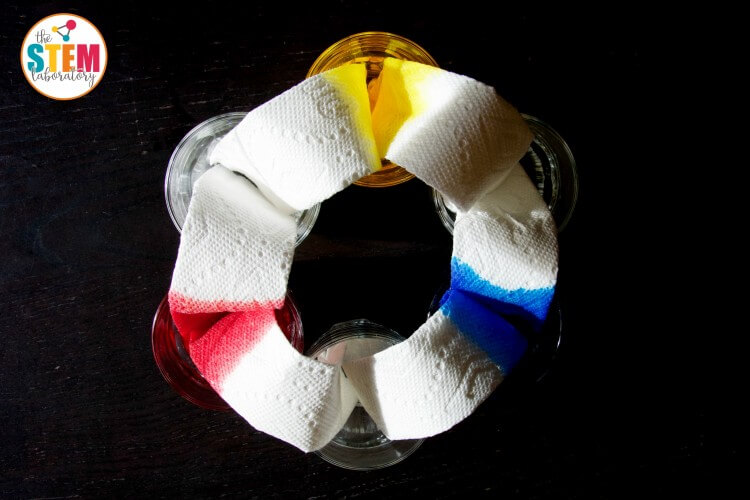 After another several minutes, the colored water had almost travelled the whole length of each paper towel. 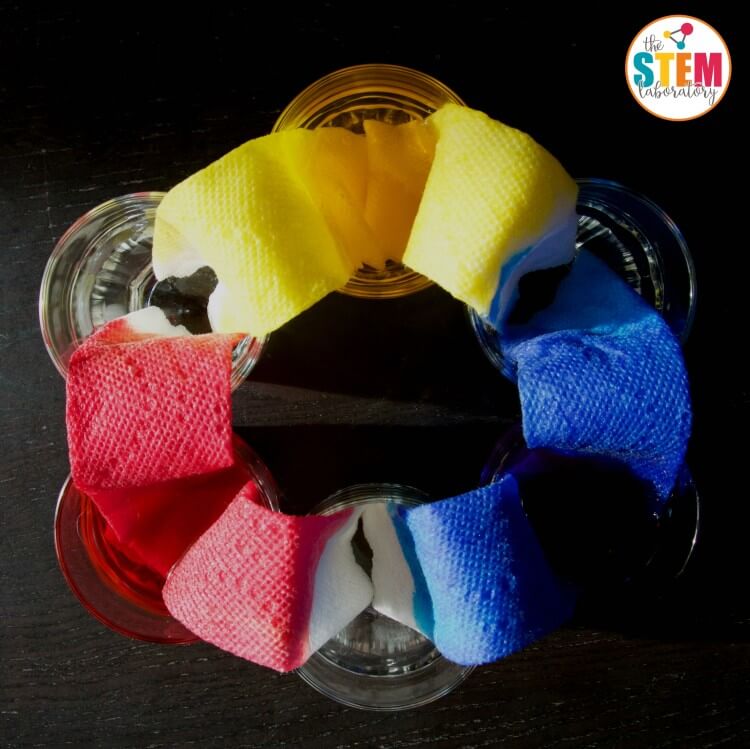 Five minutes later, the water had traveled all the way up and then down the paper towel and was dripping into the empty glass.

The yellow and red water dripped into the empty cup to make orange!  It made for a good lesson on color mixing. 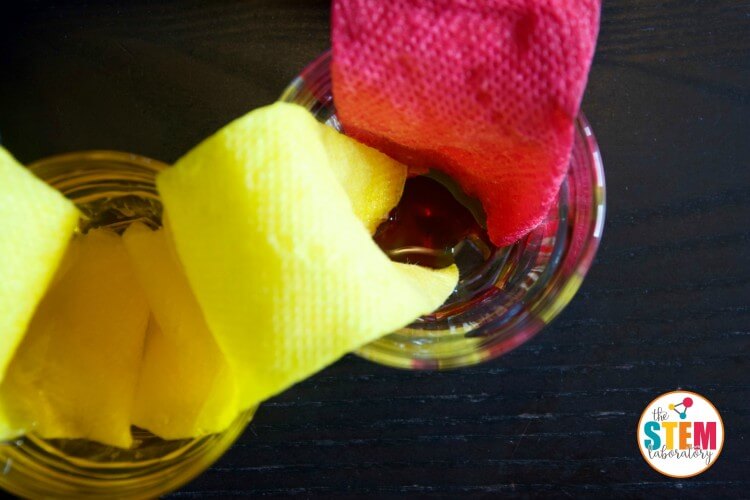 After another five minutes, we could see the water level had dropped in the red, yellow, and blue glasses and rose in the once empty glasses as the water continued to travel from the more full glasses to the less full glasses. 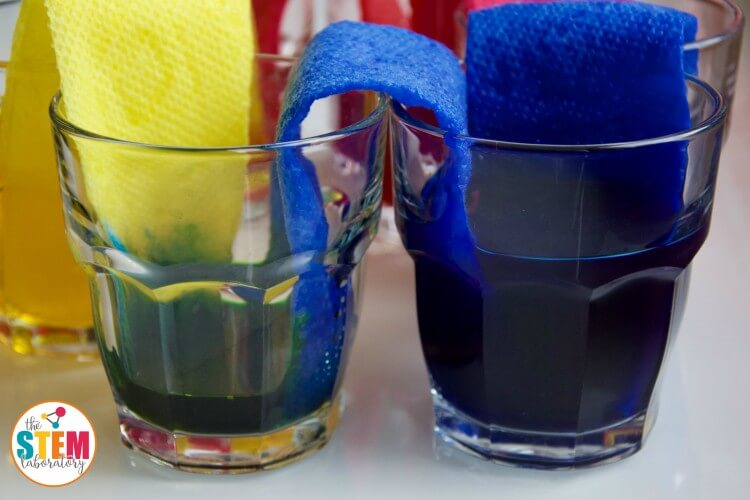 If you aren’t seeing much movement within a few minutes, it may be that you need to add more water to your colored water glasses.  It really needs to be almost at the top for the water to walk quickly.  So try topping off those glasses and seeing if that gets things moving.

If you see the water moving up the paper towel but it seems like it’s taking forever, it may be the type of paper towel you are using.  You want a paper towel that will really hold a lot of water.  We have used Bounty Select-a-Size and Target’s Up and Up Brand Select-a-Size with success.

It really is worth the extra effort of trying different cups and paper towels to get this activity to work.  And once you have had success, don’t throw out those beautifully colored paper towels or the colored water!  We gently squeezed out our paper towels and let them dry in a heap on a baking sheet.  We ended up with gorgeous tie-dyed looking paper towels to use for crafts and we used the leftover water as watercolors for painting with later. 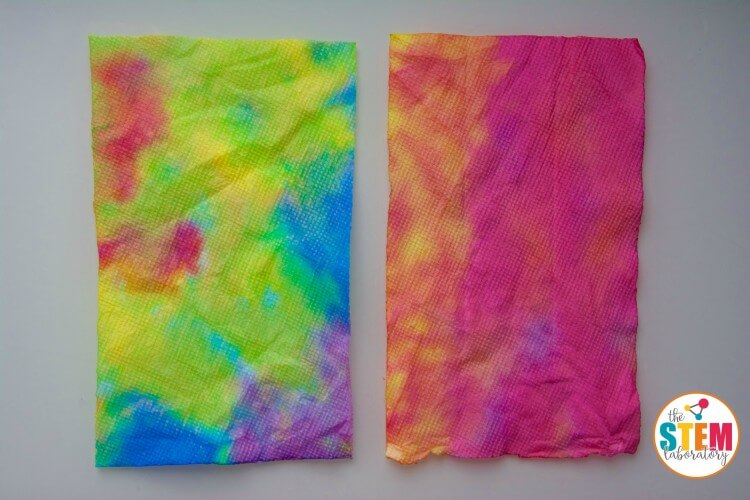 The colored water travels up the paper towel by a process called capillary action. Capillary action is the ability of a liquid to flow upward, against gravity, in narrow spaces.  This is the same thing that helps water climb from a plant’s roots to the leaves in the tree tops.

Paper towels, and all paper products, are made from fibers found in plants called cellulose.  In this demonstration, the water flowed upwards through the tiny gaps between the cellulose fibers.  The gaps in the towel acted like capillary tubes, pulling the water upwards.

The water is able to defy gravity as it travels upward due to the attractive forces between the water and the cellulose fibers. 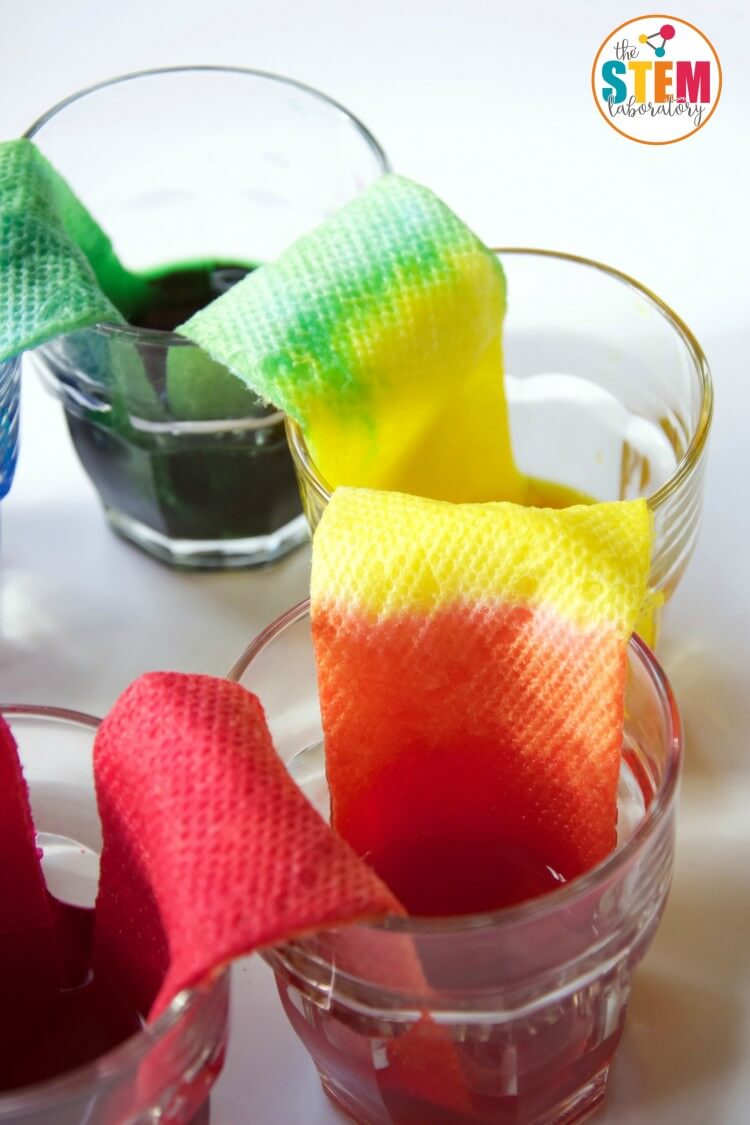 The water molecules tend to cling to the cellulose fibers in the paper towel.  This is called adhesion.

The water molecules are also attracted to each other and stick close together, a process called cohesion.  So as the water slowly moves up the tiny gaps in the paper towel fibers, the cohesive forces help to draw more water upwards.

When that happens, the water will not travel up the paper towel anymore. That is why it helps to shorten the length that colored water has to travel by making sure your paper towel isn’t too tall and making sure you fill your colored liquid to the top of the glass.

Turn this demonstration into a true experiment by varying the water level {volume} you start with and seeing how long it takes the water to reach the empty glass.

Or start with the same volume of colored water and change the brand, type {single vs double ply, quilted vs not} or length of paper towel to see how long it takes for the water to “walk” to the empty glass.

You could even use the same volume of water, same length and brand of paper towel but vary the height of the filled glass, by raising them up on books, to see how that affects the speed of the water as it “walks” to the empty glass.

Have you had enough fun with the paper towels?  Try using other paper products to see how the type of paper effects the results.  Try toilet paper, printer paper, newspaper, or a page from a glossy magazine.  What do you predict will happen?

Help kids keep track of their results by grabbing our free record sheet! Then join The Plato Pack so you can access DOZENS more jaw dropping (but easy prep!) science experiments kids will love! 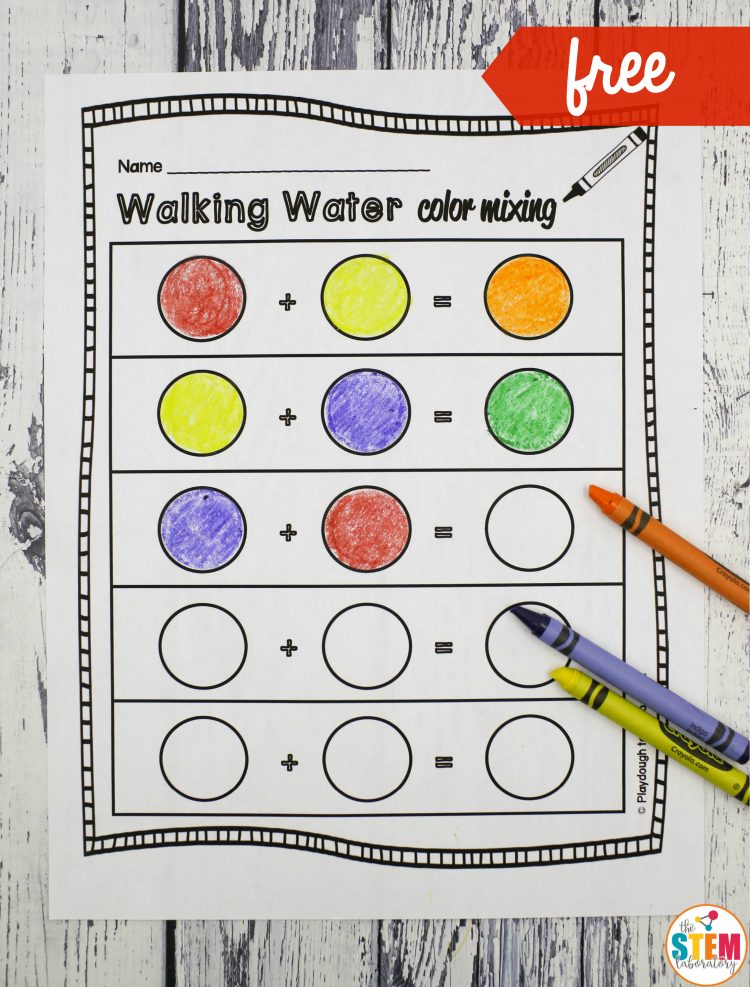 Save time, stay inspired and get EVERY student bigger results! 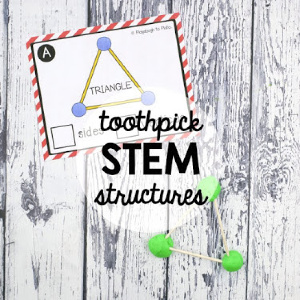