There are so many fun ways to learn with conversation hearts and these simple STEM catapults rank as one of our favorites! With just a few supplies, kids can build a catapult that really launches. It’s an engineering project little scientists will beg to build over and over again. 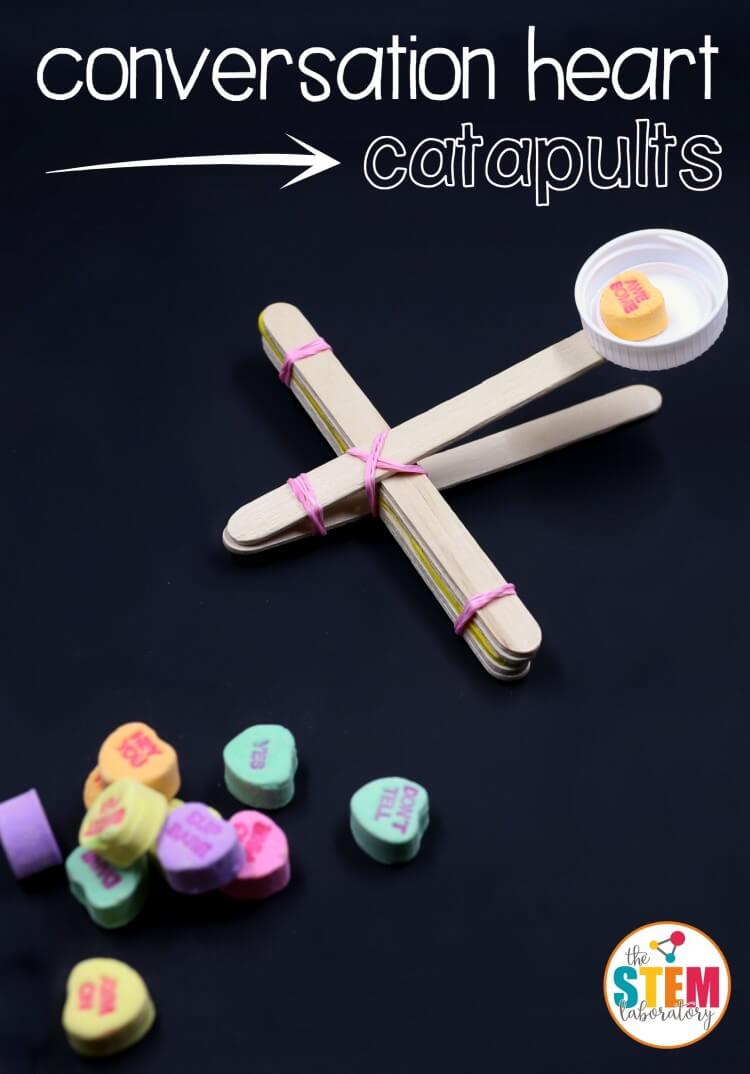 To prep, we first gathered together our supplies:

With our supplies in hand, we were ready to jump in and start building!

The catapults are surprisingly simple to build! Middle Brother (age 4) helped me count out five sticks. We stacked them on top of each other and tightly bound both ends with a rubber band. 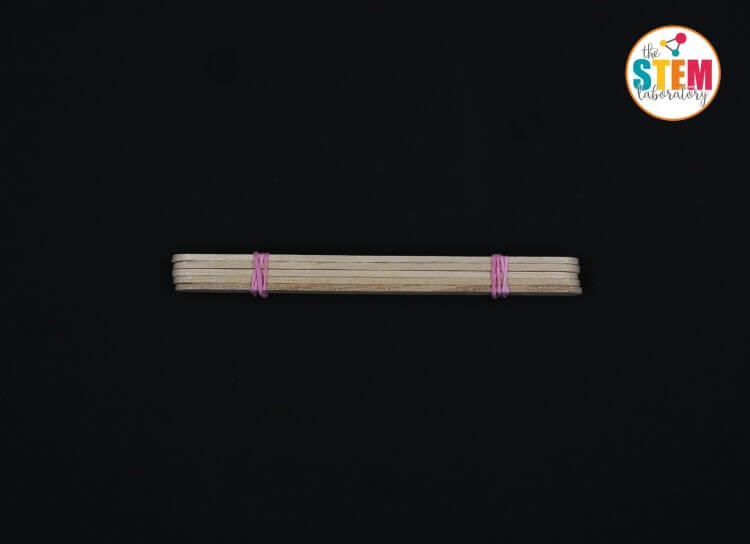 Next, we placed two sticks on top of each other and wrapped a rubber band around one end to squeeze them together.

We pried apart the unwrapped end and slid our bundle of five sticks as close to the hinged end as it would go. Then we wrapped the final band criss cross around them to secure the two parts in place. 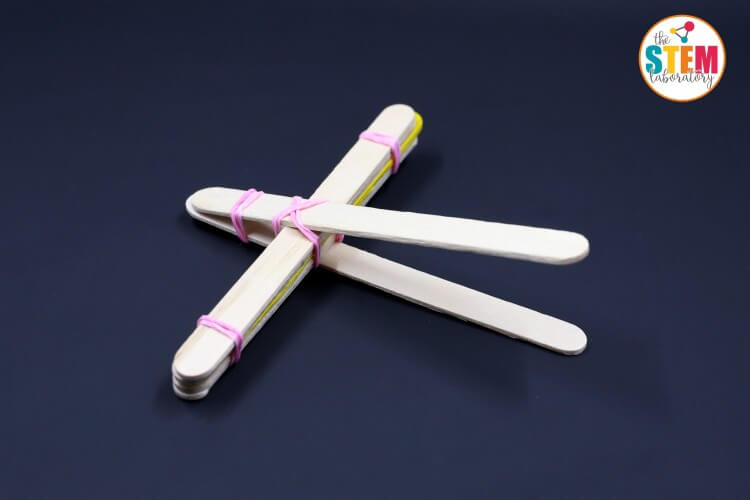 After our hot glue gun warmed, we squeezed a pea size amount on the end of the top popsicle stick and pressed our lid in place to make a launch pad. 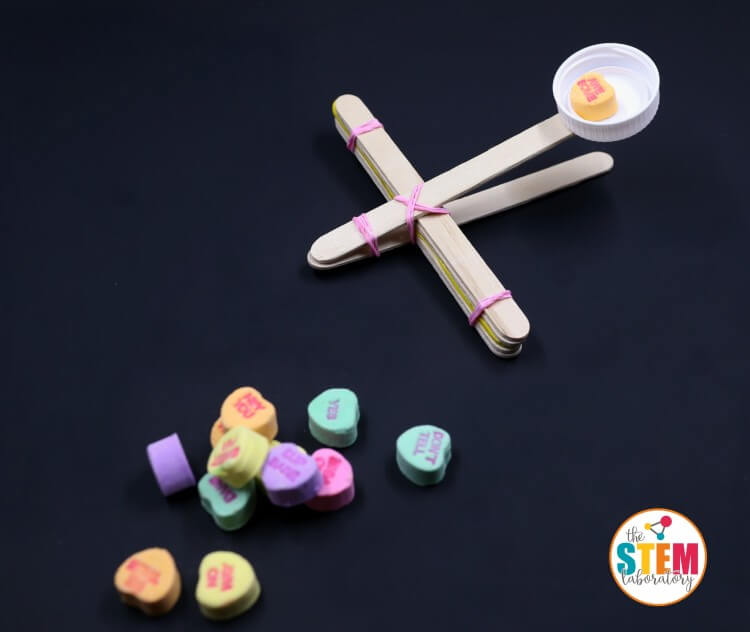 Middle Brother couldn’t wait to get his hands on the catapult. But before I would pass it over, we covered a few safety rules:

Note: Middle Brother’s a leftie so the right and left directions may be flipped for some kids. 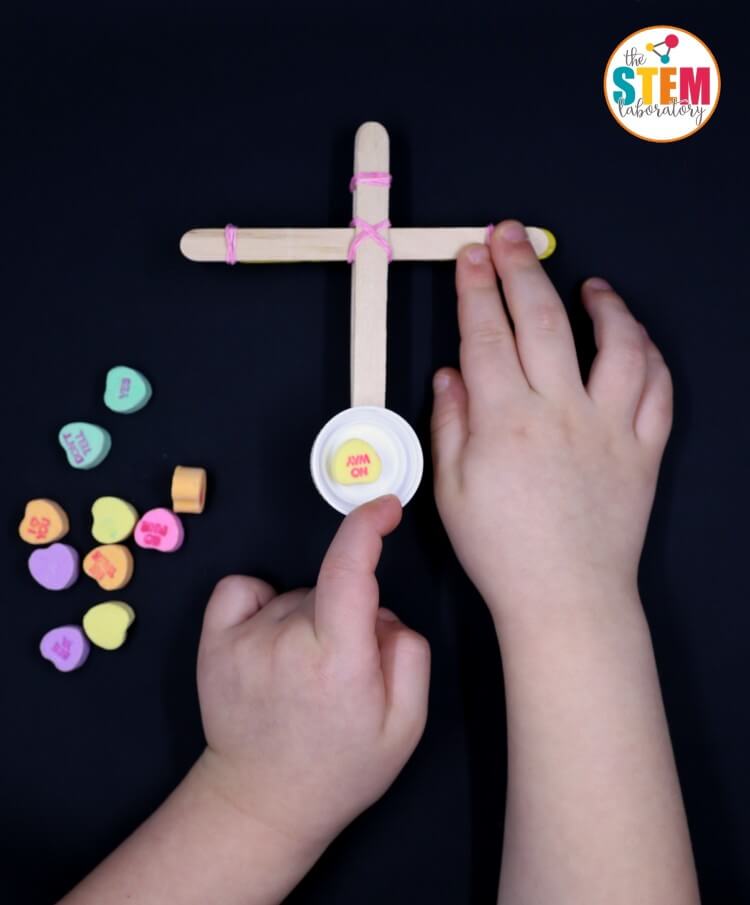 After a few rounds, he decided to experiment with his catapult a little bit to see what design changes would affect the height and distance of the conversation hearts. Testing the effect of one change at a time, he moved the bundle of sticks closer to the launching pad, loosened the rubber band on the hinged sticks, and experimented with pressing harder and softer on the launching pad.

Every tweak he made created a noticeable change!

In the catapult we built, as we pressed down on the arm, tension was building and energy was being stored.

Energy that is stored when a material is compressed {think of a spring} or stretched {a slingshot} is called elastic energy.  When you release the arm of the catapult, the elastic energy is converted into kinetic energy – the energy of motion.  When you place an object like the conversation heart in the bucket, the heart will move at the same speed as the arm and the bucket.

When the arm stops, the heart projectile continues to move forward due to Newton’s first law, which states that an object in motion, stays in motion. The heart becomes airborne.

Gravity pulls the heart back toward the ground, giving the candy its trajectory, or path.

Make science fun for kids with our set of 30 jaw dropping science experiments and science journal! All of the projects use common household supplies like salt and baking soda. They’re easy for grown ups and super motivating for little scientists!