Need a fascinating, hands-on way to teach kids about density? You’ve come to the right spot! This oil and ice density experiment is an easy way to mesmerize students of all ages.

And speaking of mesmerizing, check out our jaw-dropping 30 Science Experiments in our shop all kids will love! 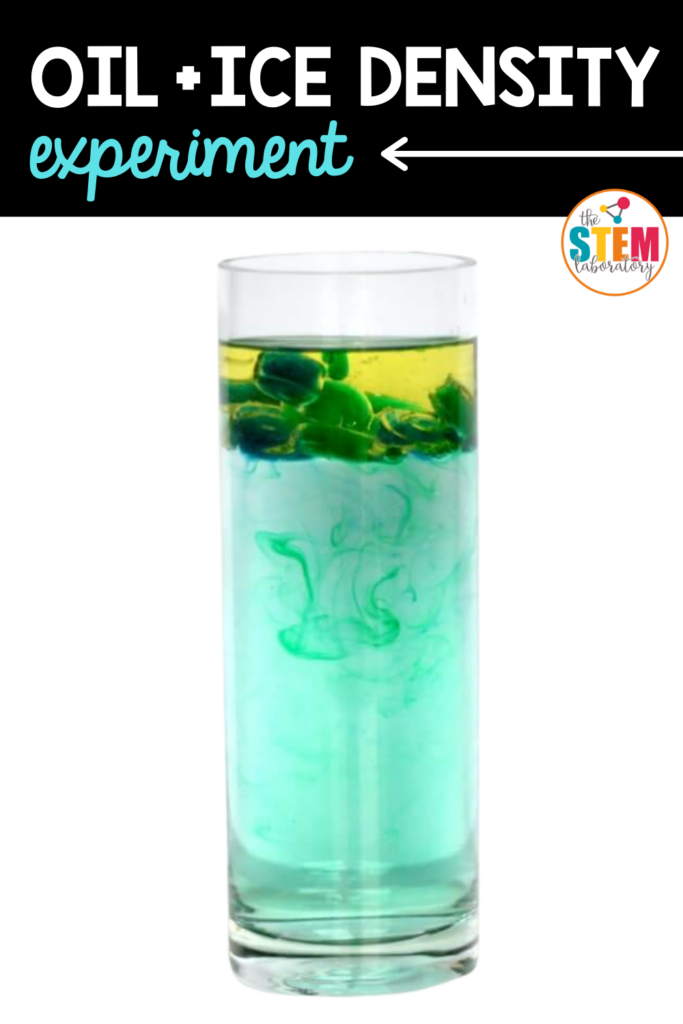 Getting the oil and ice density experiment ready was very easy.

First we made colored ice cubes.

I mixed a few drops of blue and green food coloring into water and then poured the colored water into our silicon ice molds.

After a few hours in the freezer they were ready to go!

We filled a tall vase about 3/4 full of water.

Then we poured a layer of vegetable oil about 2 inches thick on top of the water.

It took a few minutes for the oil to settle on top of the water and for all of the air bubbles to work themselves out.

Once the oil was settled, I invited the kids over to check out our cool science trick with oil and ice.

The kids noticed immediately how the oil floated on top of the water.

I explained that oil is less dense than water, which is why it floats on top.

I asked them what they thought would happen when we put ice into the vase.

We placed a few ice cubes into the vase and watched them float in the oil layer. 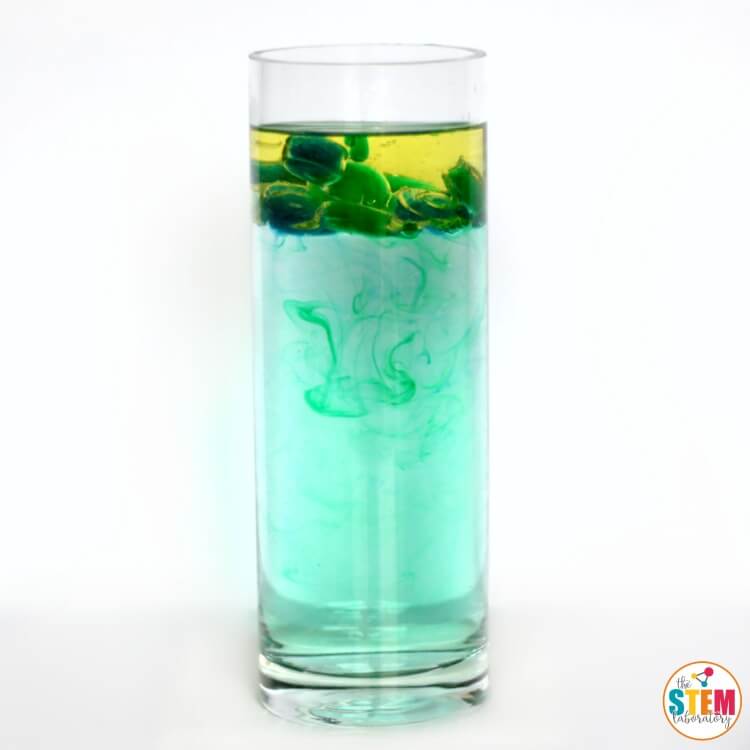 As the ice melted the drops of water slowly fell from the ice in the oil layer to the water layer. It was magical to watch the colored water droplets burst into the water layer like fireworks!

We added more and more ice and watched as it melted. Over time the water layer turned into a brilliant bluish green from all of the melted ice. 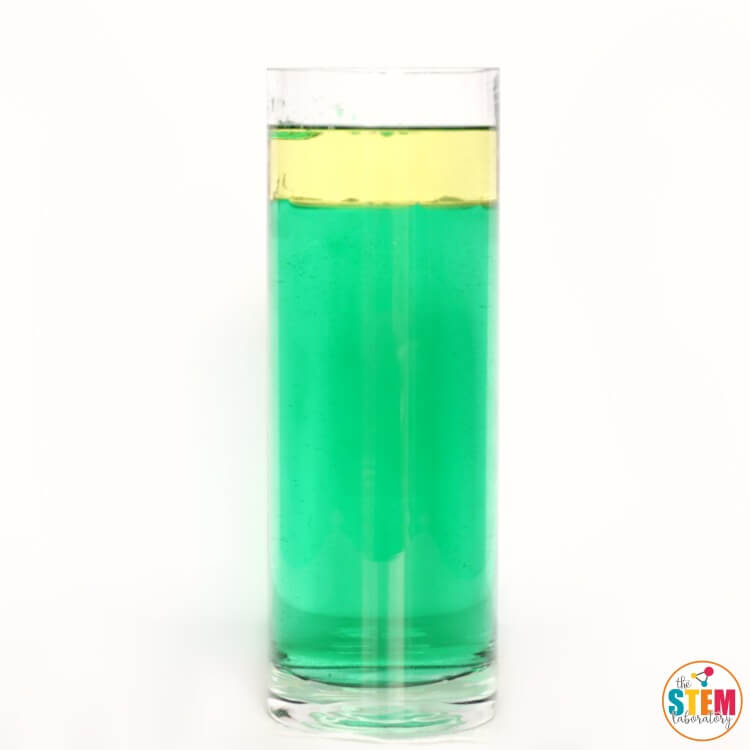 The Science Behind the Experiment

Ice has a density of about 0.92 g/cm3, which is why it floats in the oil layer. As the ice melts and turns into liquid water, it becomes more dense than oil and drops down into the water layer. 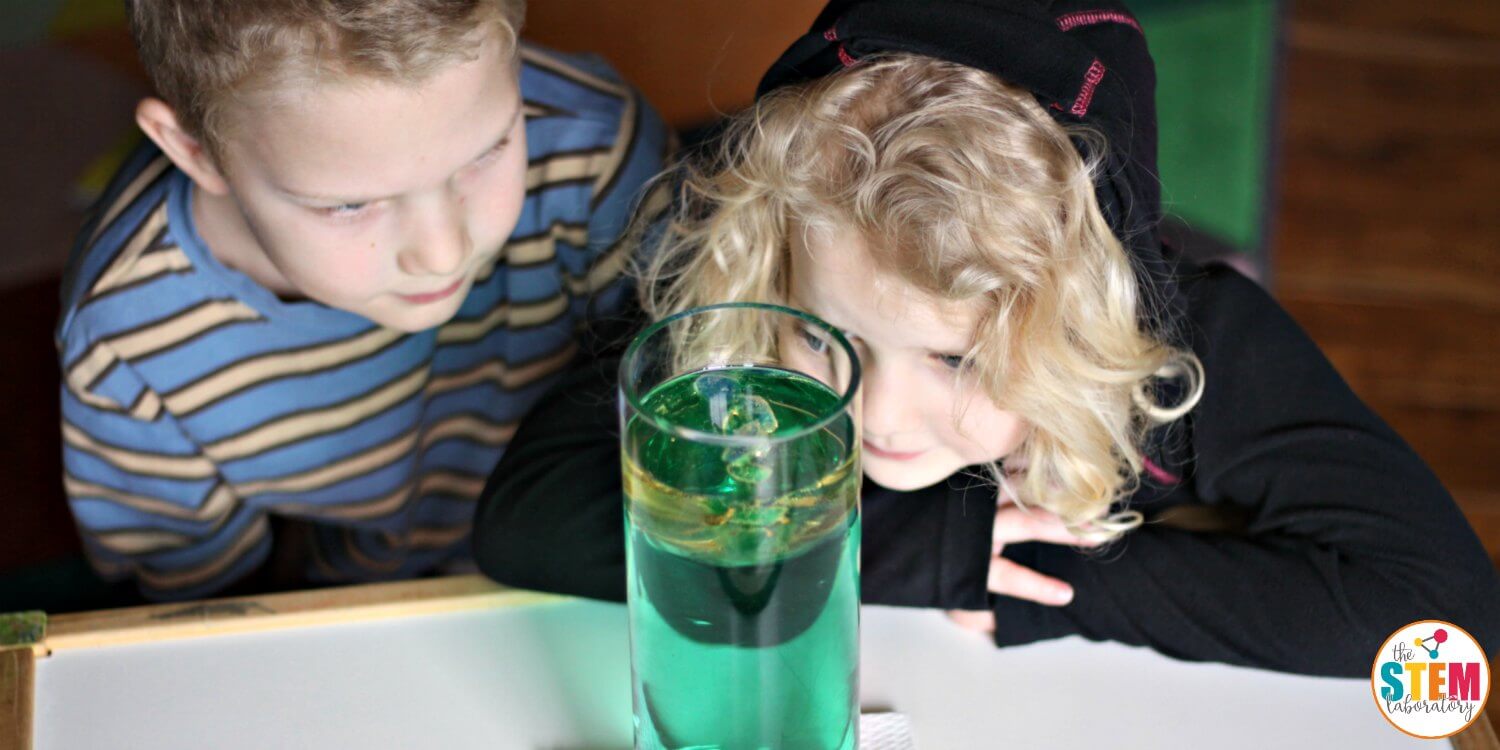 Oil and water do not mix together because they are made of different kinds of chemical bonds.

Continue the fun and grab our 30 Science Experiments (complete with a no prep journal to record results) in our shop!