Follow the step-by-step directions below and then hop over to take our popular 5 Day STEM Challenge! (Your kids will thank you.) 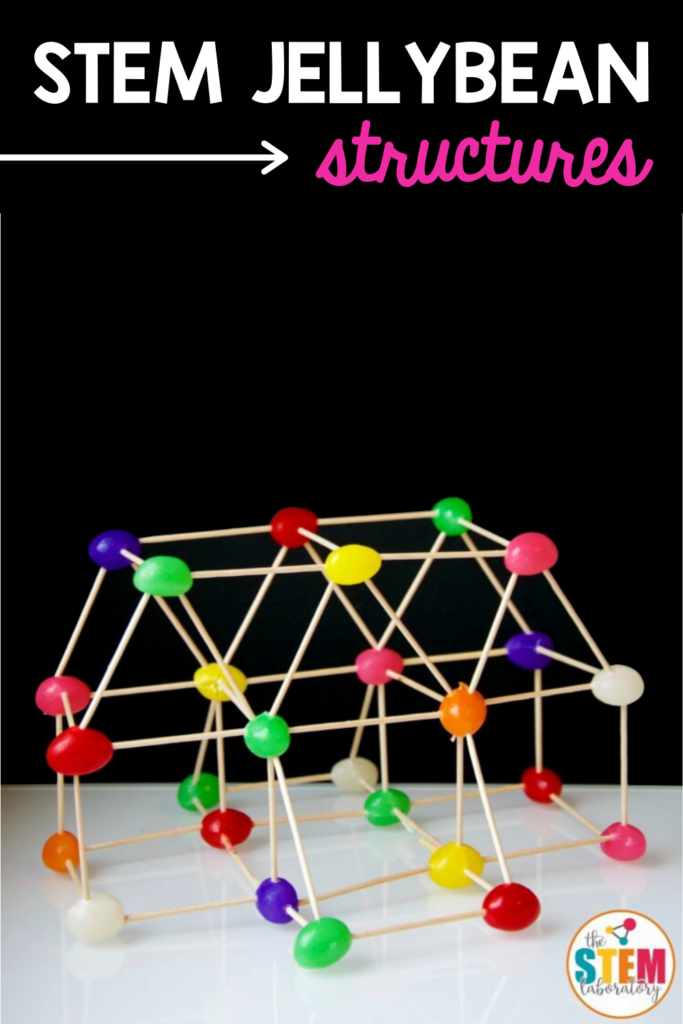 We’ve done this activity before using marshmallows, but those always proved frustrating as more complicated structures became unstable and collapsed.

The hard, sticky inside of the jelly beans were so much better and made some seriously stable creations.

Be careful with little ones, the hard shell on the jelly beans can be hard to pierce.  While my 3 year-old didn’t have many issues, the toothpicks could slip and poke little hands.

In the beginning, I didn’t give my 3 and 6 year-old many instructions. I just wanted keep the activity open ended and let them to be as creative as they wanted to be. 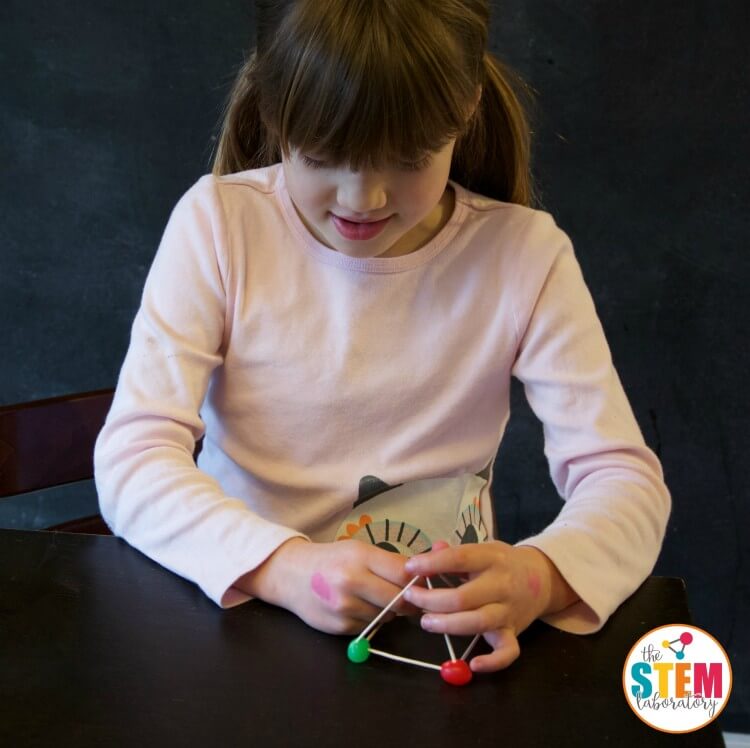 My 6 year-old began by constructing a series of pyramids. She made a square first and then added the triangular sides.

As she built, we talked about what 2D shapes made up her 3D shape.  I’d ask her to count how many planes (flat surfaces) and how many vertices (corners) her pyramid had.

After making several pyramids, she moved on to making cubes, then joined them together to make a larger structure. 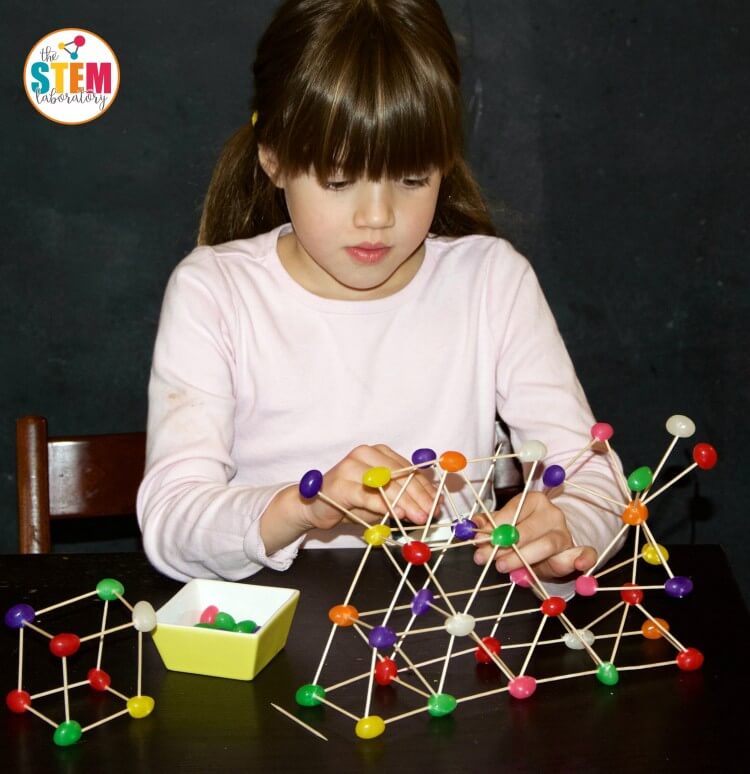 At some point, she decided that she wanted to make a stronger tower.  She built a cube, a pyramid and a prism and pressed down on each to see which was the strongest.  She thought the shapes that used triangles seemed to be stronger. 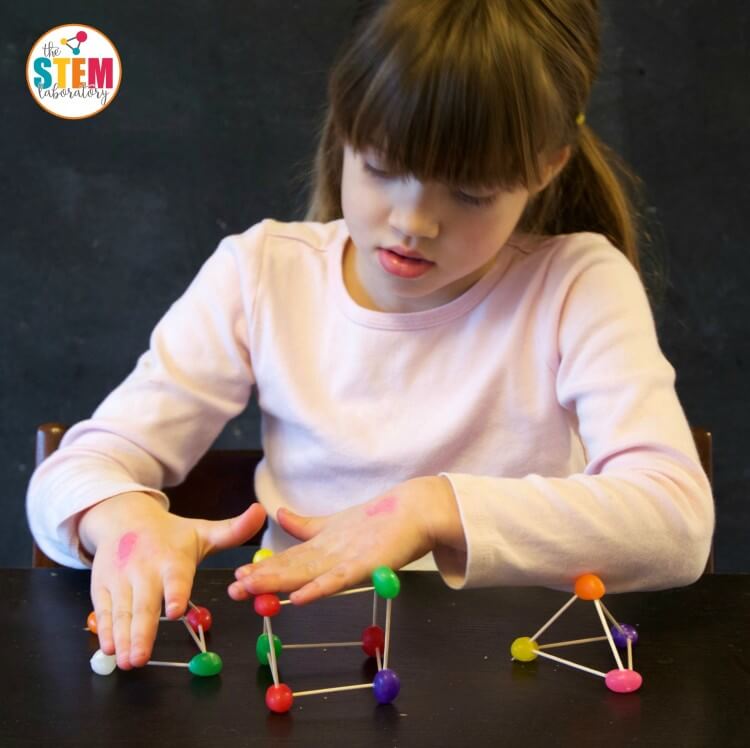 So she began on her second tower.  At this point, I suggested testing which tower was stronger by seeing how many books each tower could hold.  And the stacking began! 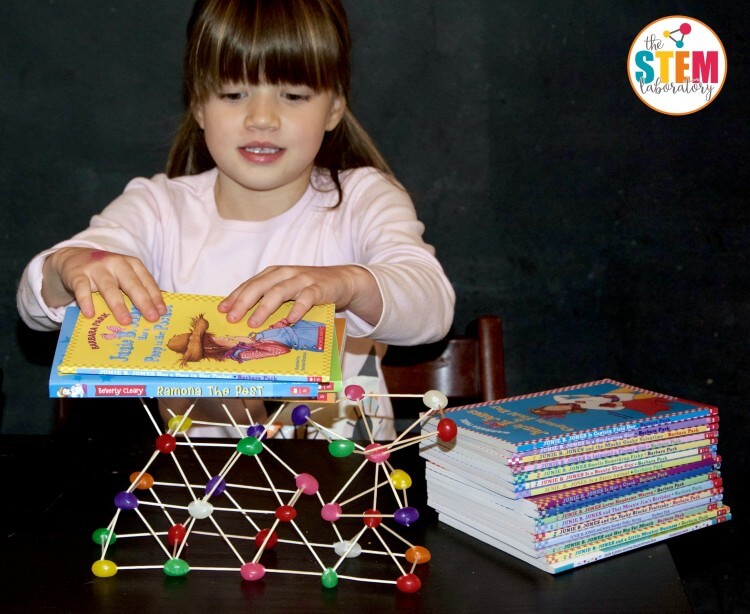 The first tower started leaning and the books slid off after eight books.

The next tower held a whopping 32 books before crumbling under the weight.  After comparing both towers, we saw that the second tower was shorter and built with more precision.  We figured it was both of these things that helped make it stronger.

We built and tested our jellybean structures for a good hour.  It looks like we came up with a new equation for an awesome time!

Continue the hands-on and engaging learning by taking our 5 Day STEM Challenge!