My little astronomers love observing the night sky! After they asked how the moon shrunk and grew, I knew it was the perfect time to teach them about the moon’s phases with this oh-so-yummy Oreo moon phases activity. Who knew science could be so tasty?!

For a printable version of this activity, grab our Outer Space Activity Pack from our shop or Teachers Pay Teachers! 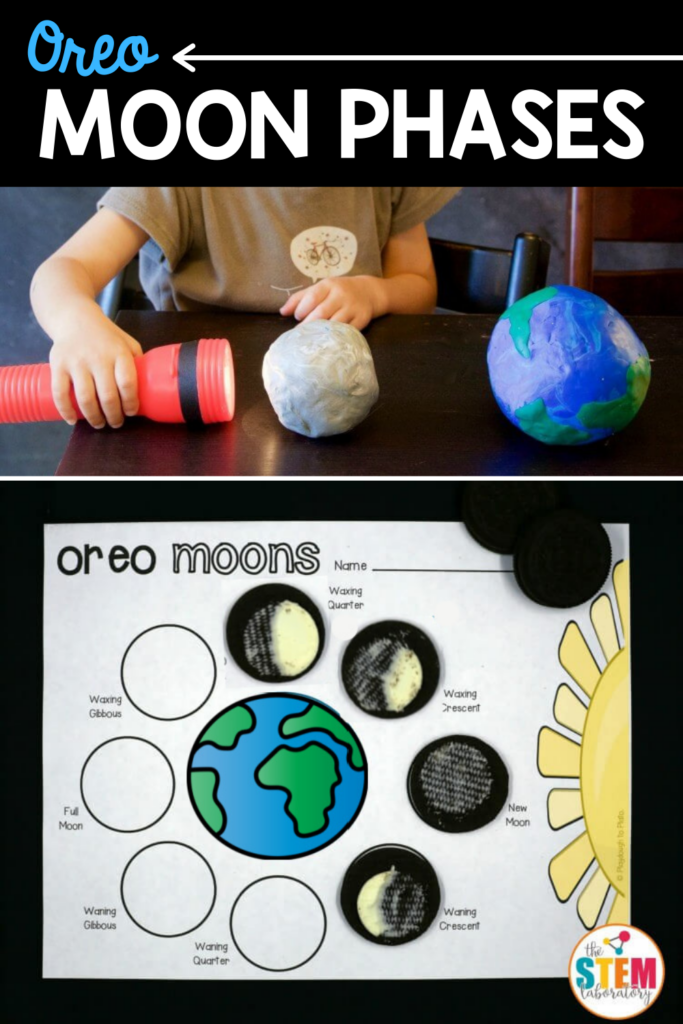 To prep for the Oreo moon phases activity, I needed:

Why We Have Day and Night

Before beginning the demonstration, I asked my 3 and 5 year old what they thought made the moon shine.  They both guessed that it made its own light like the sun.

Next, I asked about the moon’s shape.  They both said it was a circle with a “duh, Mom” look on their faces.

That look quickly faded when I then asked them the next question.  “Why the moon doesn’t always look like a circle?  Where does all of its light go when it looks like it’s missing part of the circle?” They were stumped.

So, I handed my 3 year-old the flashlight that would act as our sun.  I gave my 5 year-old the earth (a ball we covered in clay) and grabbed the medium ball that would be our moon.  I intentionally made the moon a little on the large size so it would be easier for my kiddos to see the light reflecting off it.

First, I explained how Earth spins on its axis to create night and day.  We used a tiny red bead and stuck it in the clay Earth about where we lived.  I gave Earth a gentle spin in front of the flashlight sun. My kiddos could easily see that when it was night, the red bead was away from the sun. 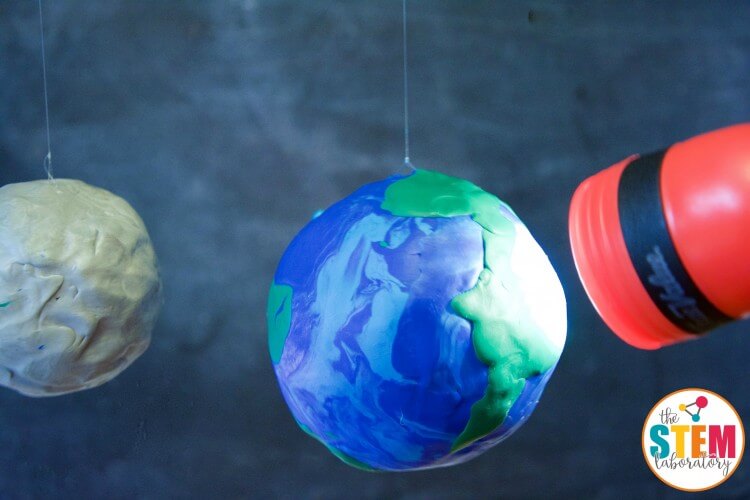 The earth kept rotating, the sun rose on the red dot, and it was day.  They both loved spinning the earth and saying “good morning, good night” over and over as the sun rose and set on the red bead.

Why the Moon Shines

Now, it was time to throw the moon into the mix.  I explained that the moon did not make its own light but simply reflected the light from the sun.  Then, I demonstrated how the moon circles Earth.   The type of moon we see depends on where it is in relation to the earth and sun.  (You can use this helpful diagram to help young astronomers visualize the moon’s rotation.)

We started our demonstration with the moon was on the opposite side of the earth as the sun (the flashlight) like the picture above.  All of the sun’s light was reflected so it was a full moon. 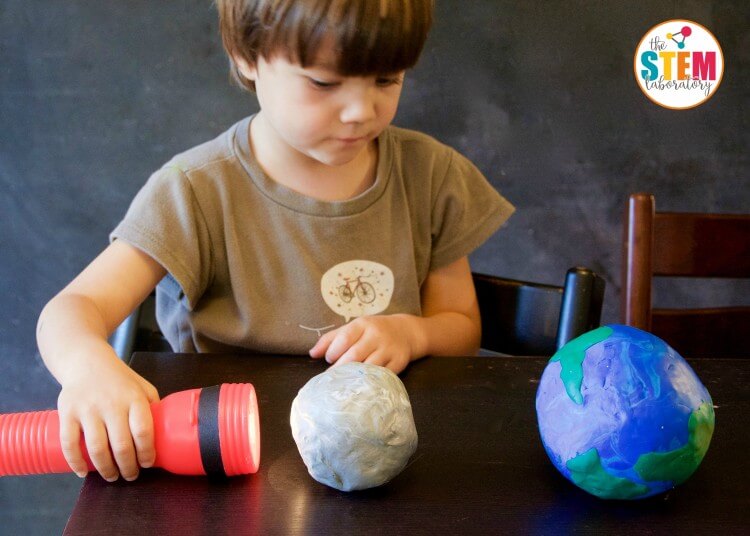 Once my kiddos got the idea down, I explained how we were going to move the moon around the earth to see how its shape changed and record what we saw using Oreos.

We started where we left off, with the moon’s face being shadowed.  This was the easiest moon to create with the Oreo. My 3 year-old carefully separated the Oreo.  She was thrilled when he got a perfectly clean cookie to use for the new moon.

Tip: Our first attempt a this demo failed to the delight of my husband and kiddos who got to eat the rejected bag of reduced fat Oreos.  The original Oreos are much easier to separate than the low fat version.

We continued moving the moon around the earth and copied what we saw by scraping off the Oreo cream to match the visible parts of the moon from Earth. 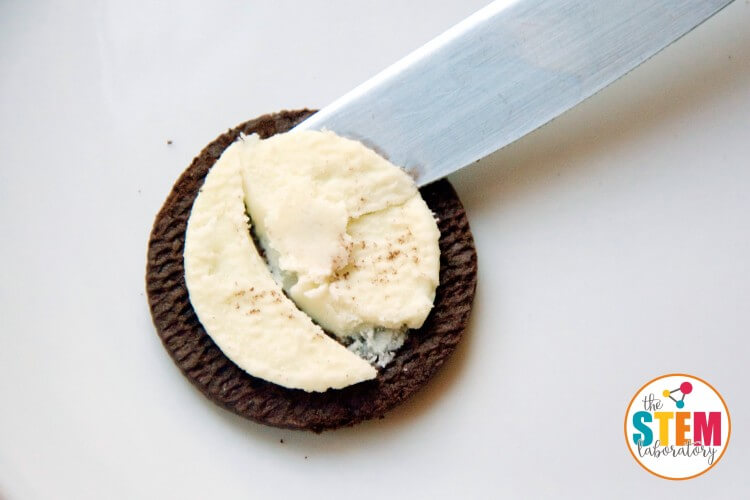 My 5 year-old daughter wanted to use her teeth to scrape off the cream filling.  But, she had to settle on simply eating the unused cookie tops instead.  For the scraping, a child sized butter knife was the easiest for her to manage.

Here, the moon was half way around the earth and my daughter was super excited to have made a perfect full Oreo moon. 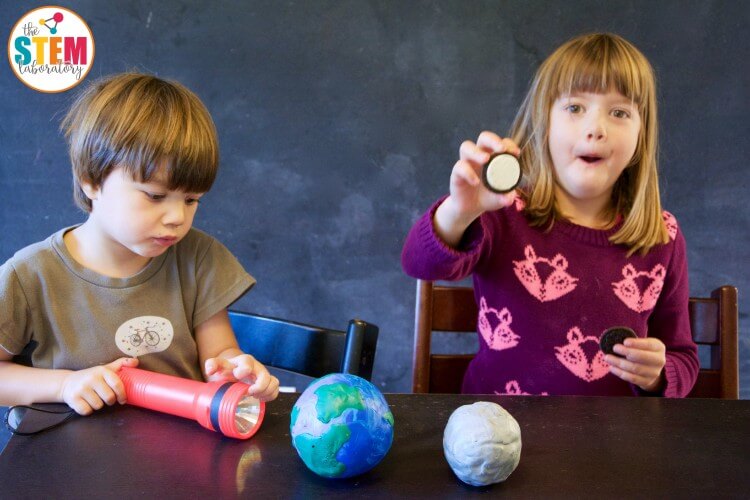 At this point, my 3 year old simply wanted to eat cookies and be the sun.  So, my daughter continued making each Oreo moon phase and placed them on the Oreo moon phase paper. 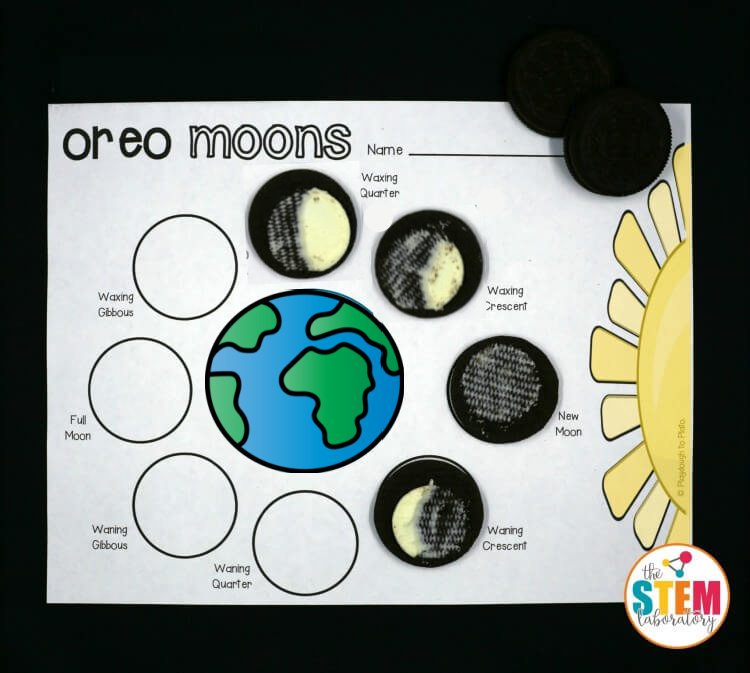 We continued rotating the moon and observing the light that reflected off it.  My daughter then asked how long it took the moon to go around the earth.  I said that on average, it takes 29 days, 12 hours and 44 minutes, about the length of a month.

We didn’t have to wait nearly that long for the Oreo moon to complete its rotation though.  My daughter really wanted to color each moon on her paper.  So, she grabbed a grey and yellow crayon and carefully colored each circle to show the correct phase.

Now, whenever we glance up at the night sky, my kiddos love trying to track the moon and name its phases.  Any activity that encourages my kiddos to take a moment to observe the world (or universe) around them is a win in my book.

For a printable version of this activity (plus 24 other motivating projects!), grab our Outer Space Activity Pack from our shop or Teachers Pay Teachers! 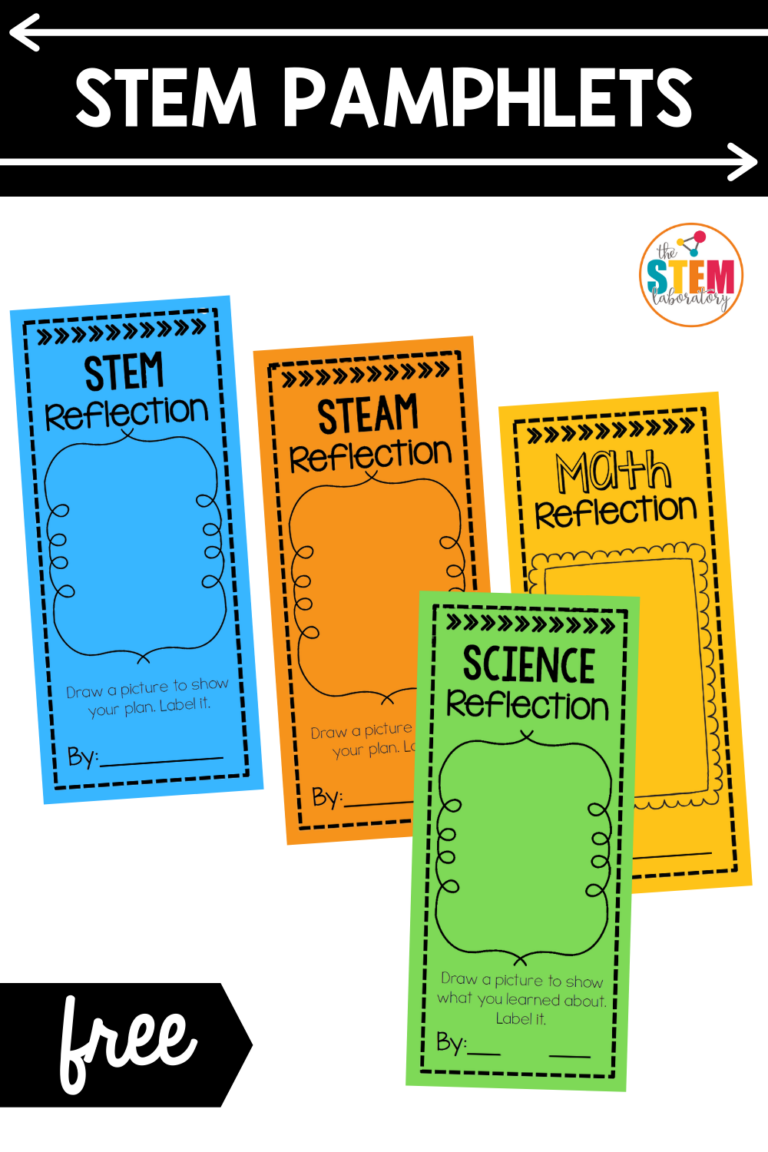 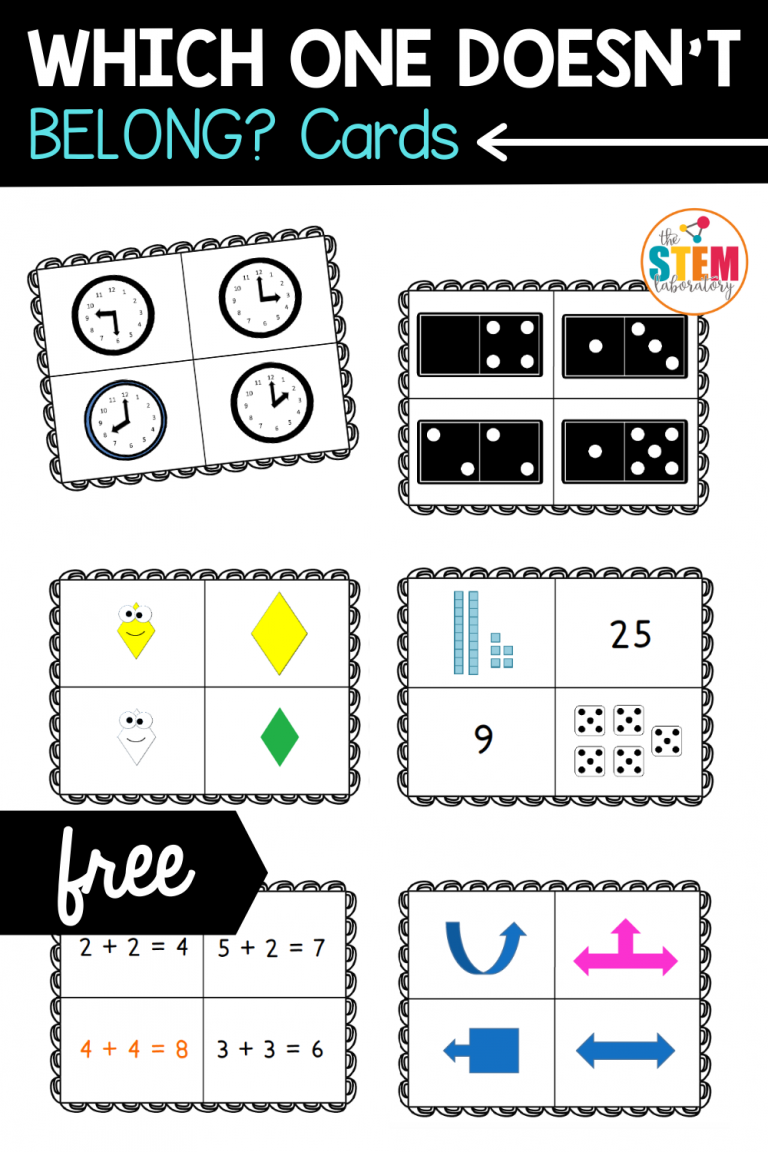 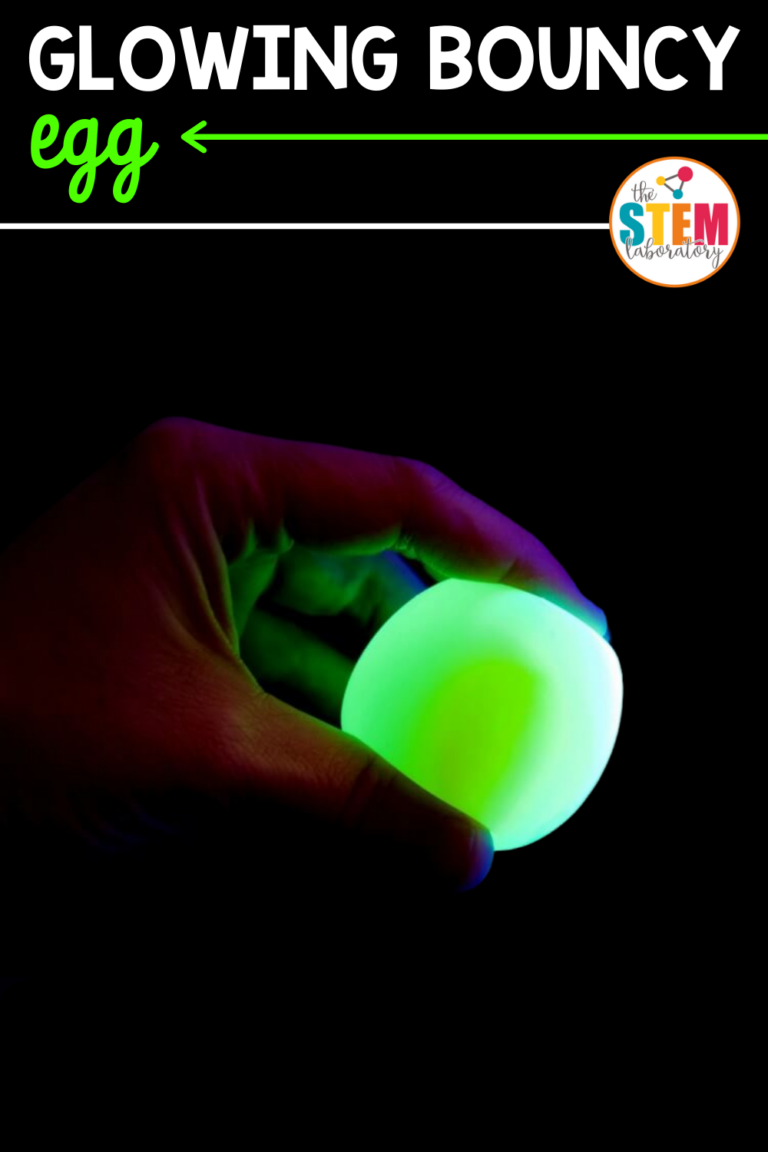 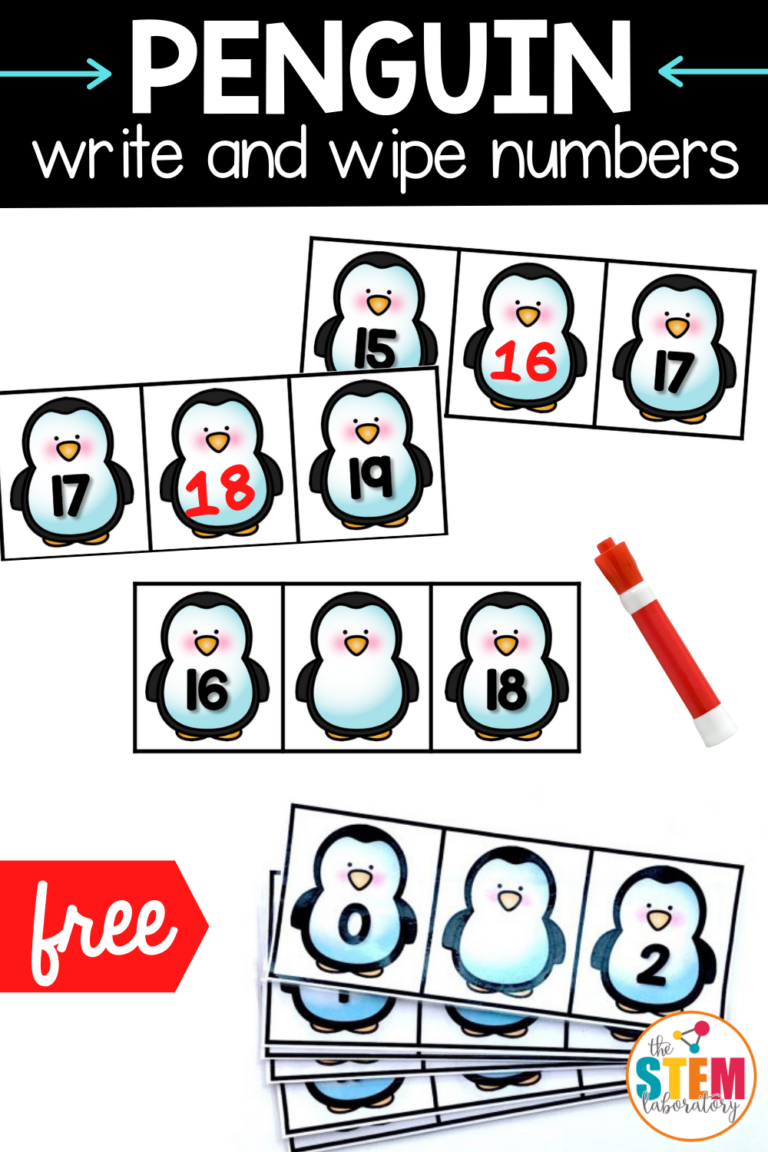 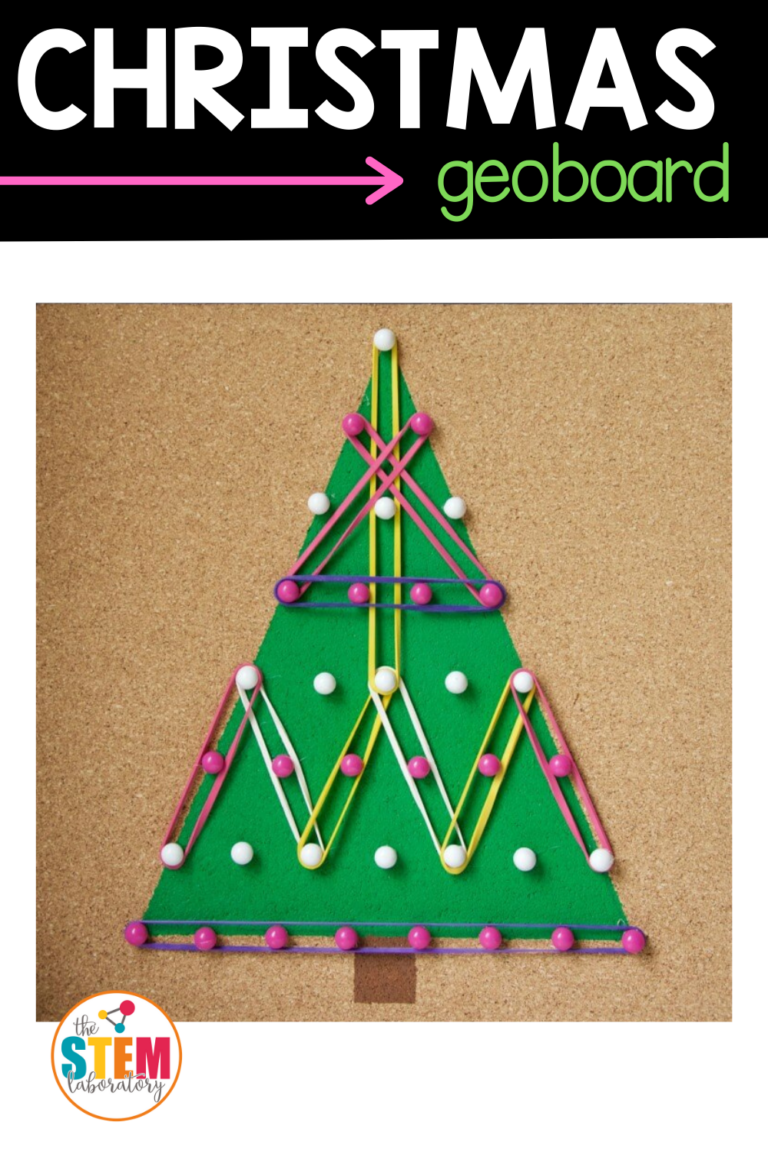 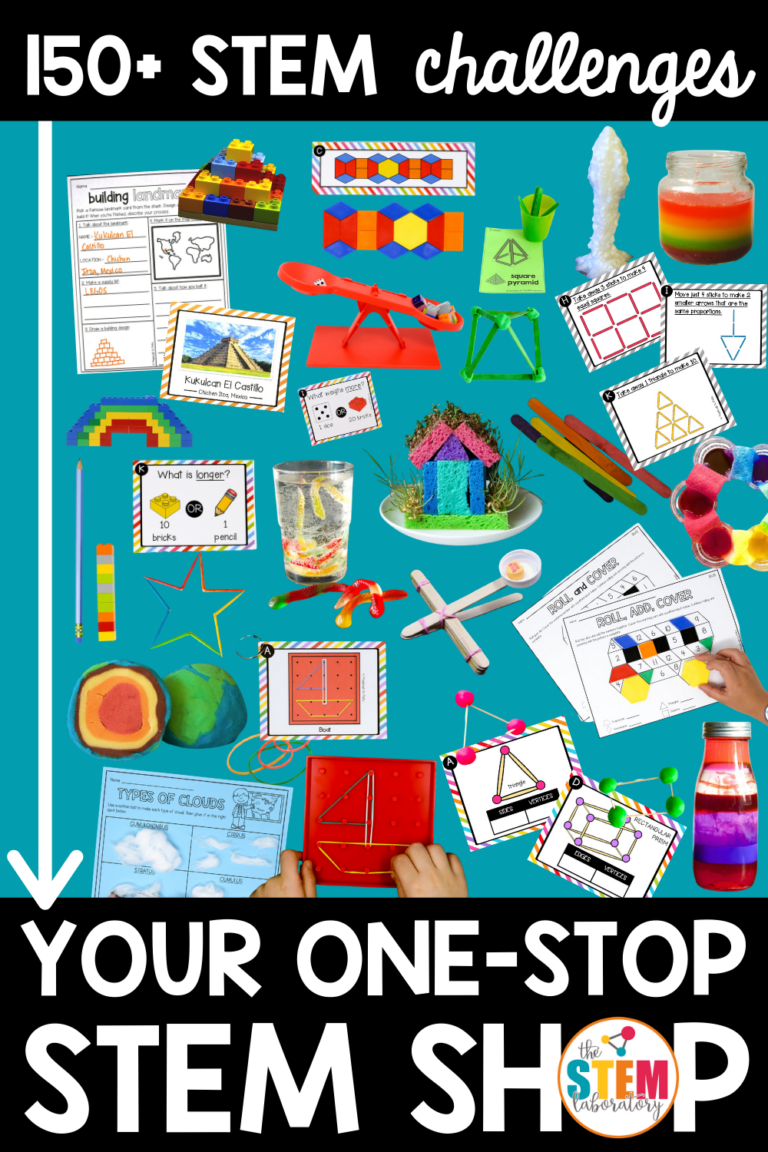